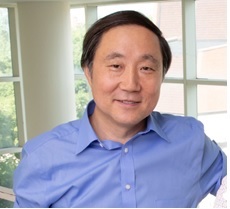 Dr. Yi Lu received his B.S. degree from Peking University in 1986, and Ph.D. degree from University of California at Los Angeles in 1992. After two years of postdoctoral research in Professor Harry B. Gray group at Caltech, Dr. Lu started his own independent career in the Department of Chemistry at the University of Illinois at Urbana Champaign in 1994. He was promoted to Associate Professor with tenure in 2000, full Professor in 2004 and endowed Jay and Ann Schenck Professor in 2010. In August of 2021, Dr. Lu moved to the University of Texas at Austin, becoming Robert J.V. Johnson-Welch Regents Chair in Chemistry.

Dr. Lu’s research interests lie at the interface between chemistry and biology. Specific areas of current interests include: a) design and engineering of functional metalloproteins as environmentally benign catalysts in renewable energy generation and pharmaceuticals; b) Fundamental understanding of DNAzymes and their applications in environmental monitoring, medical diagnostics, and targeted drug delivery; and c) Employing principles from biology for directed assembly of nanomaterials with controlled morphologies and its applications in imaging and medicine. Dr. Lu has received numerous research and teaching awards, including the Howard Hughes Medical Institute Professors Award (2002), Fellow of American Association for the Advancement of Science (2007), Fellow of the Royal Society of Chemistry (2015), Royal Society of Chemistry Applied Inorganic Chemistry Award (2015), and Joseph Chatt Award (2020).