Novel Sensing and Imaging Agents for Metals and Other Metabolites in Environmental Monitoring, Food Safety, Medical Diagnostics, and Therapy

Selective sensors and imaging agents are very useful for on-site and real-time detection in environmental monitoring, food safety, medical diagnostics, and imaging. While much progress has been made in detecting large molecule targets, such as nucleic acids and proteins, sensing and imaging small molecule targets and biomarkers, such as metal ions and organic metabolites, remain difficult because they are subtle in structural differences and present in trace amounts. Therefore, detection in metabolomics has become a new frontier for chemical biologists following advancements made in genomics and proteomics. We have identified challenges in both fundamental science and in technological development, and we have made significant progress in meeting these challenges.

For a general overview of this area, refer to the slideshow on the right and the following review articles:

I. Selection and Characterization of Novel DNAzymes and Aptamers

In fundamental science, designing selective sensors based on a single class of molecules for a broad range of targets remains a significant challenge. Most processes for sensor development proceed on a trial and error basis where successes in designing agents for one target can be difficult to translate into successes in designing agents for other targets. To meet these challenges, we have used in vitro selection or SELEX to obtain DNAzymes, a class of metalloenzymes that use DNA molecules exclusively for catalysis, and aptamers, a class of nucleic acids that rival antibodies in binding targets of choice strongly and specifically. In addition, by using counter selection techniques, we can improve the selectivity for our target of interest against other similar targets.

In the process of selecting new functional DNA, we strive to understand structural and chemical features of nucleic acid oligomers that are responsible for high selectivity and enzyme-like reaction mechanisms by using a suite of biochemical and spectroscopic methods (e.g. UV-vis, EPR, XAS), as well as x-ray crystallography, to improve the rational design of functional DNA.

II. Design of DNAzyme and Aptamer-Based Sensors for in vitro Detection for Metal Ions and Small Molecule Targets

We are developing highly sensitive and selective sensors for metal ions and other small molecule targets, such as environmental contaminants, unsafe adulterants in foods, biomarkers for early disease detection, and therapeutic drug monitoring in point-of-care diagnostics. By conjugating the DNAzymes and aptamers obtained from in vitro selection with either a fluorophore and quencher, gold nanoparticles, or gadolinium/supermagnetic iron oxide nanoparticles, we have developed new classes of fluorescent, colorimetric, and MRI agents, respectively, for detecting metal ions and a wide range of other targets with high sensitivity (down to 14 pM) and selectivity (> 1 million fold selectivity). 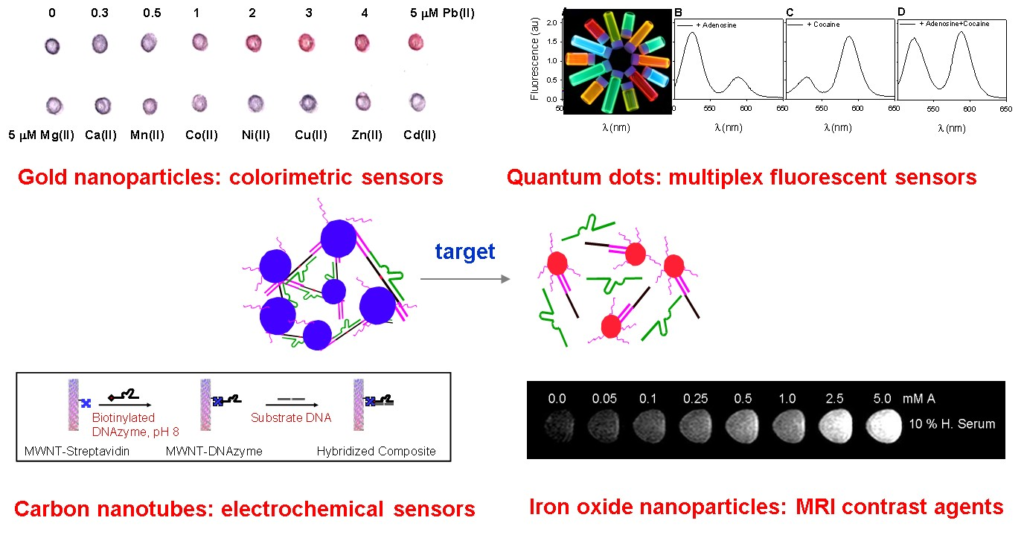 While metabolites such as metal ions can be beneficial or toxic, the roles of these metabolites in human health is not fully understood. To offer deeper insight into their roles in biology, we are also developing imaging agents to study the distribution and the functional mechanisms of metal ions and small molecules in living cells and in vivo. These sensors can help fill the major gap in biomedical sciences where understanding of metabolomics lags significantly behind that of genomics and proteomics. 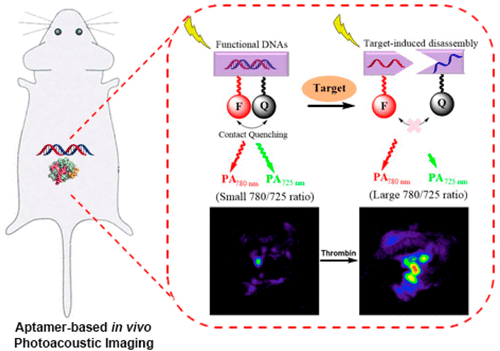 In technological development, there are still significant barriers preventing the public from adopting new devices or technologies which are developed in academic laboratories. We are exploring ways to overcome these barriers by taking advantage of the wide availability and low cost of pocket-sized electrochemical devices, such as glucose meters, to detect many non-glucose targets, including vitamins (e.g. biotin), toxic metal ions (e.g. Pb2+), adulterants (e.g. melamine), toxins (e.g. aflatoxins), and disease markers (e.g. cancer).

We are developing multimodal theranostic reagents that use aptamers as targeting agents and liposomes, which can encapsulate fluorescent, PET, and MRI imaging agents, as well as therapeutic drugs, for both detection and treatment of disease.